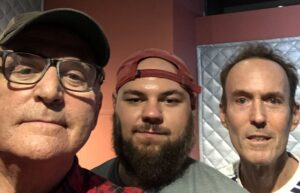 Carl has been a long-time Boston area college radio DJ, first on Harvard’s WHRB Record Hospital then on Boston College’s WZBC, where his Gulls Window Circus show continues today.  When you write comments on records, you use an alias, his was Gull.

Gull was Carl’s blue fronted amazon parrot companion (rip) and he used to look at her, and desire to see the world with the same wonder Gull’s eyes seemed to shine with.  Animals are true innocents. That vision inspired the name of his radio show Gulls Window Circus, envisioning how Gull saw life from a window.

Carl wrote reviews of records he bought on gullbuy.com from 98-06, and registered the most common misspelling gullboy.com.

When this new band rose out of a cover band at work, it was a no-brainer to use Gull Boy as the name. The band shares some of its sound with the ’84 Paisley Underground bands, along with the Glasgow label Postcard Records and Liverpool’s Zoo Records.